Should you wish to discuss the impact of the global economy on your portfolio please contact Proxima on 08 8332 4700. 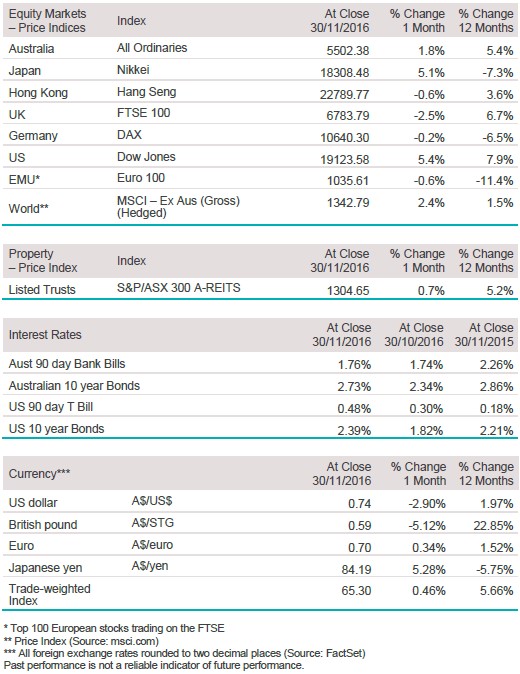 The unexpected election of Donald Trump as the next US President dominated news and financial markets in November, with the brief initial sell-off in equities turning into a rally in many of the major equity markets. The US Dollar hit a 14-year high and there was a sharp sell-off in bonds as investors priced in higher US government debt and inflation following Donald Trump’s election victory. Most economic data was, on the whole, relatively good showing that the global economy continues to be relatively healthy.

In the US, economic data during the past month has continued to be relatively strong. There was an upward revision to third quarter GDP growth, now estimated at 3.2% annualised, helped by stronger consumer spending and corporate profit growth. Employment has also continued to grow and the unemployment rate fell from 4.9%, to a new post financial crisis low of 4.6% in November, pointing to tighter labour market conditions.

The strong economic data and the pro-growth fiscal policies of the incoming US President, Donald Trump, mean that the US Federal Reserve is highly likely to raise interest rates when they meet in December.

Although the European economy continues to perform relatively well, with moderate growth rates, falling unemployment and stronger business conditions, investor attention was focussed on political events such as the Italian referendum and French elections, which have the potential to destabilise the European Union.

In China, economic indicators have continued to paint a picture of an economy that is performing relatively well. Traditional measures of Chinese activity such as Purchasing Manager Indices, industrial production and fixed asset investment are relatively strong and housing and infrastructure activity are, for the time being, still supporting economic growth and helping to boost commodity prices such as iron ore and coal.

Japanese economic growth continues to be relatively sluggish notwithstanding the significant stimulus from the Bank of Japan. Third quarter GDP growth came in at a relatively disappointing 1.3% annualised rate and retail spending contracted against year-ago levels.

In Australia, some recent economic indicators have suggested that the economy may be losing momentum. Australia’s third quarter GDP declined 0.5%, partly due to wet weather, but household consumption growth was disappointing. Recent dwelling investment and building approval figures indicate that residential construction may be weakening more quickly than expected. In the labour market, wages growth slowed to the lowest level ever recorded, just 1.9% per annum in the September quarter, and trend employment growth has slowed sharply highlighting potential labour market softness.

The S&P/ASX 200 Accumulation Index returned 3.0% over the month of November with most sectors finishing the month in positive territory. The best performing sector was financials, which returned 6.0% for the month, helped by the rise in bond yields and expectations that the regulator would delay imposition of higher capital requirements on Australian banks. Healthcare stocks fell 1.6% extending the losses incurred in October as investors priced in softer industry conditions. Small cap shares underperformed larger companies again with a loss of 1.2%, including dividends. 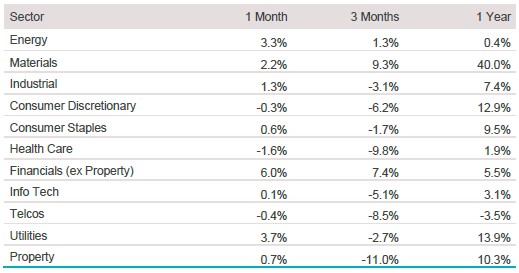 Developed share markets gained 2.7% in November in local currency terms and rose 4.6% when converted back into Australian Dollars. Shares in the United States made fresh record highs during the month, following the US election result, which is seen as pro-growth and good for US companies. The US S&P 500 index gained 3.7% while Japanese shares benefited from the weaker Yen to rise 5.1%. Global financial sector stocks rose 9.1% in November, boosted by higher bond yields and prospects for a reduction in the regulatory burden, which were part of Donald Trump’s campaign promises. Energy shares gained 5.9% following OPEC’s production cut announcement.

In an absolute sense, price-earnings ratios are full, but compared with returns from bonds or cash, valuations do not seem excessive. Moderate economic growth should be sufficient to support mid-to-high single digit earnings growth for the key US and European indices in 2017.

The S&P/ASX 300 A-REIT Accumulation Index (which includes distributions) returned 0.8% in November which was a reasonably good result considering the sharp rise in bond yields during the month. Over the past year, property securities have returned 10.3%.

Over one, three, five and seven years, A-REITs have outperformed Global REITs. Currency-hedged global property securities, as represented by the FTSE EPRA/NAREIT Index, were up 3.5% over a one-year period.

Internationally, the Barclays Global Aggregate Bond Index (A$ hedged) lost 1.63% as bond yields rose in the United States, United Kingdom, Germany and to a lesser extent Japan. In the US, 10-year Treasury bond yields rose from 1.83% per annum to 2.37% as investors priced in higher inflation and government debt following Donald Trump’s election victory. During November, the credit spread on high-yield corporate bonds fell from 491 to 467 basis points above US treasury bonds.

The information contained in this Market Update is current as at 12/12/2016 and is prepared by GWM Adviser Services Limited ABN 96 002 071749 trading as ThreeSixty Research, registered office 105-153 Miller Street North Sydney NSW 2060. This company is a member of the National group of companies.

Past performance is not a reliable indicator of future performance. Before acquiring a financial product, you should obtain a Product Disclosure Statement (PDS) relating to that product and consider the contents of the PDS before making a decision about whether to acquire the product.